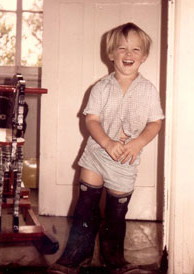 As children develop, they are presented with a series of challenges in terms of learning and social skills. Some development involves gradual cumulative changes, such as in the development of language. Other development involves more distinct stages, where the child moves from being one kind of person to functioning in a quite different way, such as the change from constructing ideas in more concrete and literal ways to being able to think more abstractly. Whether the challenges emerge from gradual change or come at distinct stages in children’s development, those challenges will create stress points for children, particularly those with difficult temperaments.

Children have a chronological age and an emotional age. The term, chronological age, refers to the number of years that have passed since they were born. It is this age that is commonly referred to when we ask people how old they are. Unfortunately, it is also the age used for most life transitions.

‘Talk to the animals’

Next time you are watching a documentary about baby animals, especially the large cat families, watch how the young animals ‘play’. Biting, wrestling, pushing, chasing, shoving, growling, snarling and rolling on top of each other are all part of how they learn the skills that will mean the difference between survival or death in the wild.

Sibling dislocation refers to a change in the position of a child’s birth order in terms of role and identity within the family system. This often results from the difficult child being unable to perform at their chronological age leading to the child moving into a different position in the family. Younger siblings may be able to complete tasks that are extremely difficult for the older sibling to perform. So, instead of the older child guiding the younger ones, the leadership order is turned around, often resulting in extreme frustration for the chronologically older sibling.

To have satisfactory relations with children of one’s own age is a very important aspect of a child’s social adjustment and becomes increasingly central as children move into adolescence. Social cognition (how people think about and understand social interactions) provides a basis for interacting with others and when this area of a child’s development is delayed, peer relationships are dislocated. Because children with a difficult temperament can be extremely intrusive in social interactions, the parents of other children may encourage the isolation of difficult children. Retaliation is often seen when a difficult and isolated child becomes the ‘class clown’ to establish a place in the group.